Try the culinary specialities of Saint Germain Boucles de Seine! Whether you’re a sweet tooth or savoury fan, there’s something for every palate. Some of our ambassadors can tell you where they find their favourite treats. You can also follow our encounters with local producers and live our “J’ai pris mon panier” (I’ve got my basket) experience.

The refined camembert at Mesnil-le-Roi

If the Camembert “Pont l’Évêque” is among the jewels of Norman heritage, there was a time when Le Mesnil participated in its reputation thanks to the talent of its master refiners! In the inter-war years, Mr. Masson owned a house at 7 rue de la Marne (today No. 35) had the idea to use his cellar to refine cheese. To enter his cellar, you had to go through a hatch that was opened with a counterweight. Its cellar communicated with those of the neighborhood as well as that of the castle of Mesnil. In 1938, Mr. and Mrs. Rappin settle place of Strasbourg and become master cheese makers. Mr. and Mrs. Imbott, settled in the rue des Cheverrures, will be the last ripening cheese makers of the village. Nearly 200 varieties of cheese were kept in the chalky rocks of the quarries, 6 meters underground. 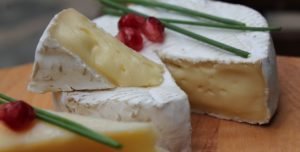 Legend has it that in 1837, when the first train of the Paris-Le Pecq/Saint Germain service carrying Queen Marie-Amélie was behind schedule, the chef of Pavillon Henri IV was worried about his potatoes getting cold and, plunging them back in the pan to heat them up, had the surprise of seeing his “chips” turn into “potato puffs”.

Alexandre Dumas, father and son, came to live in Saint-Germain in 1844 at the Medici villa and took many of their meals at the nearby Pavillon Henri IV hotel, whose famous chef, Collinet, was nicknamed by Dumas Senior as “a cohort in culinary art and bearnaise cutlets”.

You’d be forgiven for not knowing that sauce Bearnaise originated in Saint-Germain-en-Laye, not in Béarn. It was invented by mistake in 1837, by the Pavillon Henri IV chef who rectified a shallot reduction which had gone wrong by emulsifying it with an egg yolk. He spontaneously called it “sauce béarnaise” as the bust of Henri IV caught his eye from where it dominated the room.

So, did the Saint-Germain recipe for split pea soup arrive from the North? That was the origin of the fresh-pea soup that is now a restaurant classic going by the name of Saint-Germain soup.

This dish conjures images of local produce, especially Saint-Germain peas which are common in Yvelines.

Another triple-cream cheese matured in the cellars of Sainte Suzanne dairy (Rue au Pain), Saint-Germain has the specificity of being generously covered in chopped almonds.

In 1999, the municipalities of Saint-Germain-en-Laye and Le Pecq decided to replant and exploit vineyards below the Saint-Germain-en-Laye Terrace in order to restore the site’s touristic vocation.
By planting 1,820 vine stocks over 2,000 m² in April 2000, the two municipalities renewed with our region’s wine-growing history spanning more than thirteen centuries and going as far back as the 8th century. It seems the vineyard of Le Pecq was highly appreciated.

The vines were planted with the technical assistance of an oenologue and winegrower and with the support of the agricultural and horticultural lycée of Saint-Germain-en-Laye.

The vines are a combination of two varieties of pinot noir which produce a Burgundy-type wine.

Every September, the grape harvest provides the backdrop to an annual event that is both educational and festive.

A speciality created by Pâtisserie Hardy, with a sweet shortcrust pastry base and a filling of Spanish almonds and Saint-Germain cream.

This pastry speciality was invented by Maison Grandin in 1925 in memory of the great musician born in 1862 near the shop located in Rue au Pain.
It consists of a hazelnut biscuit base, a praline mousse, rum-soaked raisins and a chocolate topping.

This is produced at the farm of the agricultural and horticultural lycée of Saint-Germain-en-Laye situated on Route des Princesses.
The annual apple harvest is between 30 and 40 tonnes.
This artisan juice is 100% pasteurised, and has a consistent texture and taste.
It is made from 17 varieties of apple.